From China to Virginia

After a worldwide journey from the mass production factories of China, to Orion’s Headquarters in California, the Orion XT8i ended its journey at my house.  Shipped in two packages, one containing the base with the other containing the optical tube, finder scope, two eye pieces and Computerized Object Locator, this new telescope arrived in pristine condition with no dings in the optical tube or base and a beautifully clean primary mirror.  Pictures on the internet of this telescope do not do it justice.  Even when reading other reviews and viewing pictures posted by those who owned it, I thought to myself “well that must just be a very short man standing next to the telescope.”  Taking out the well packaged optical tube for the first time proved my “short man theory” to be incorrect.  Do not be intimidated by its size, but do be aware of it.  While the telescope tube is bulky in its shape, it weighs only 20 lbs and is easy to carry.  The base, with its weight of 21 lbs  was packed with the same degree of care as the optical tube and is equally easy to lift once assembled.

Rarely have I ever read directions.  This is not a problem when building 10 dollars models, but when putting together a dobsonian telescope, it is probably a good idea.  Thankfully, Orion provided a clear and concise manual with step by step instructions alongside pictures and graphics ensuring that

astronomers of various levels of experience will have no trouble figuring out what goes where.  With virtually all of the assembly involving the base, it was no surprise that this was the most difficult part of the process. Figuring out the correct order of the washers and how tight the two base plates needed to be proved to be a headache but overall assembly went smoothly, with it taking a couple hours for my brother Alston (the real brains behind the operation) and I to complete.

Our First Night Together
As many telescope owners will tell you, with a new scope comes the curse of cloudy skies, my experience was no exception.  About a week after receiving the scope, the skies opened up and I decided to take it out, even though there was still two week old snow on the ground that over time had turned into a solid sheet of ice.  With setup complete it was time to uncover the 8 in mirror and test her out.  My first target was Saturn.  After taking some time figuring out how to use the right angle finder scope, I placed in the provided 25mm eyepiece found Saturn and was blown away by its brightness. With several of its moons visible the brightness and sharpness exceeded my expectations.  Up next was the Orion nebula which showed off hues of green and blue that I had never seen before and Andromeda which was a slight disappointment because of my unrealistic expectations of being able to view the spiral arms in great detail. Overall a tremendous introduction to my new telescope, but as this blog has shown, this first night was just the tip of the ice berg in terms of its power and optical quality.

One of the main reasons for buying the XT8i and not the Zhumell Z8 or other less expensive 8 in dobsonian telescopes came from its inclusion of the Computer Object Locator.  The marketing claimed that with the easy alignment of two bright stars the intelliscope would display through a numbering system how far right/left and up/down to move the scope. When all numbers reached 0, the telescope would reveal the object in the field of view of a low powered eye piece. Even though this was a main feature that led me to this scope, I definitely had my doubts. As a teenager, going out many times with the Meade DS114, I was never once able to figure out how to use the Object Locator and tracker.  Now this could partially have been because of my age and not fully understanding the directions, but I believe it was also from the product not working well.  Because of this, testing the object locator on the XT8i for the first time was a bit nerve racking. Aligning the scope and typing in Saturn, the handheld device told me where to move the telescope.  Once it was complete, I realized by looking up that it was in the right ball park and was amazed when I looked through the eye piece to see Saturn positioned to the farthest edge of the field of view. This has been my experience with the Object Locator ever since. While it is not always directly in the field of view through my 25mm eyepiece, it is always in the finder scope and can be easily found by searching the small area of the sky that it takes me to.  Over the past year, this feature has helped me learn the sky to the point where I find myself needing it less the more I use it.

Optics and Performance
While having a telescope that can help you locate objects is impressive, providing unforgettable views of those objects once discovered is the most important aspect regardless of any extra bells and whistles.  While I am not an expert on the optical quality of telescopes and try not to get bogged down in debates over what wavelength a mirror is and the differences between mass produced mirrors from China compared to Taiwan, I can say this.  The high magnification views of planets and the lunar surface at magnifications up to 240X have been incredible in this telescope.  As has been noted several times in articles throughout this blog, detailed views of the Martian surface, cloud formations on Jupiter and the majestic rings of Saturn have all been viewed with sharp detail at magnifications of 120X and 240X.  The 8 inch dobsonian telescope has been described as the best entry level scope for starting to observing deep sky objects.  My experience with the XT8i has proven this to be the case.  With limited light pollution from my observing sight I have 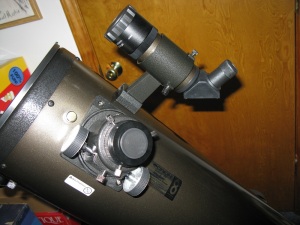 Overall Summary
Posted on telescope.com: 1/22/10
This telescope balances the three needs of any amateur astronomer: aperture, portability and affordability.  I have seen everything from low power viewings of Orion’s Nebula and Andromeda to sharp high power observations of Mars, Saturn and Jupiter that revealed detailed land features, rings and cloud belts.  Clear directions walked me through every step of assembly with my only difficulty dealing with connecting the two base plates of the Dobsonian mount.  The Computerized Object Locator (COL) included in this package is a deal that cannot be beat.  Powering up the COL, I set the telescope to vertical, do a two star alignment and view more objects in an hour than I would have in most entire nights.  On top of all of these features, the 25mm and 10mm eyepieces included provide a great starting point for viewing nebulae and galaxies as well as planets and lunar observations.  While I am sure many people will be able to carry this scope out in one piece, I carry it in two, because of its weight and how long it is.  After a year of use, I have barely scratched the surface of all the objects the XT8i can locate and observe.  High quality optics, affordable aperture and the Computerized Object Locator make this the perfect telescope for beginners and experienced astronomers alike.  I know it will provide a lifetime of use and enjoyment.