On Christmas Eve of 2010, my wife Lauren and I had been engaged for a little under an hour when she presented me with the book “Lost Moon: The Perilous Voyage of Apollo 13”. As I scanned through it, I came across a signature on the authors page that I did not expect.

Jim Lovell is my favorite astronaut–yes, I have a favorite astronaut. A veteran of the Gemini and Apollo programs, known most famously for Apollo 13. The co-author of that book was a man by the name of Jeffrey Klugger who is a senior writer for Time Magazine. While browsing Amazon.com a few weeks ago, I noticed that he had a new book out detailing the voyage of another mission involving Jim Lovell, Apollo 8, man’s first trip to the Moon. 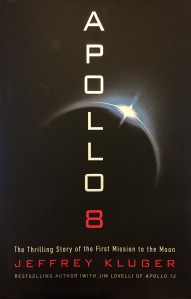 The story begins with Frank Borman being notified that his training for an earth orbital flight on Apollo 9 was being altered to a lunar orbital flight that would take place during Apollo 8. I had come across Frank Borman’s name and missions in other Apollo books such as Andrew Chaikin’s “A Man on the Moon”, but I had little knowledge of the backstory or personality of this veteran of the Gemini and Apollo programs. He along with Jim Lovell and Bill Anders are each introduced through details of their career and family life leading up to Apollo 8.

I was presently surprised with how much time the book spent on supporting events and individuals leading up to Apollo 8. The history of the National Advisory Committee of Aeronautics and its transformation into NASA takes up a good portion of the early book. Back stories for NASA officials such as Chris Kraft, Deke Slayton and Gene Kranz are delved into more than I expected.  The first half of the book is a nice, all be it brief, history lesson on the formation of NACA/NASA and the successes and difficulties of the Mercury and Gemini missions that preceded Apollo.

With the tragic fire of Apollo 1, that cost the lives of Gus Grissom, Ed White and Roger Chaffee, Kruger turns his attention to the story of Apollo and the almost insurmountable task of redesigning the capsule and putting a man on the moon before the decade was out. From this point on, the story moves at a nice pace and quickly moves to the decision to launch Apollo 8 as a lunar orbiting mission. I was inspired by the tenacity and boldness of this decision. Today, I feel the bold moves in space are being made in the private sector, with the Space X’s of the world. Apollo 8 is a nice reminder of how daring NASA was in the 60’s and 70’s with it’s lunar program.

With the first successful launch of a Saturn V Rocket carrying a crew, a feat in an of itself, Apollo 8 was off to the Moon. By all intents and purposes it was a by the book mission. There were no major mishaps, system crashes or critical failures on their six day mission. This does not mean that the story is any less interesting. Going to the Moon is never a forgone conclusion, particularly for the first time. It took a tremendous amount of planning, testing and training to make this mission a success. Once the Lunar Orbit Insertion burn was completed, the Apollo craft fell into a stable lunar orbit. The crew became the first humans to see the far-side of the Moon with their own eyes. What they would witness next would become one of the most powerful photographs ever taken.

Later into the mission, Frank Borman looked out the window of his Apollo 8 capsule and was amazed by what he saw:

“Oh, my God! Look at that picture over there! Here’s the Earth coming up. Wow, is that pretty!”

While Frank Borman took the first black and white image of this event, it was Bill Anders, who was in charge of the mission’s photography, who snagged the color photo posted above that would go on to become one of the most acclaimed and viewed pictures in the world. On Christmas Eve of 1968, Apollo 8 took some time from their busy schedule to host a live televised broadcast. They were given little direction from NASA regarding what to do so they each went around and discussed what had impressed them the most about the Moon that they had been orbiting for the past several hours. The broadcast would end however with a touching message as each of the astronauts proceeded to read from the book of Genesis.

Excerpts from the Apollo 8 Christmas Eve Message:
Bill Anders:
“We are now approaching lunar sunrise, and for all the people back on Earth, the crew of Apollo 8 has a message that we would like to send to you.”
“In the beginning God created the heaven and the earth….”

Jim Lovell:
“…And God called the light Day, and the darkness he called Night. And the evening and the morning were the first day…”

Frank Borman:
“…And God called the dry land Earth; and the gathering together of the waters called he Seas: and God saw that it was good.”
“And from the crew of Apollo 8, we close with good night, good luck, a Merry Christmas – and God bless all of you, all of you on the good Earth.”

It is easy to underestimate the importance of Apollo 8, knowing the outcome of the space race and the successful landing of Apollo 11 that would follow. But, for those who were living through these events during the tumultuous year of 1968, the Christmas voyage of Apollo 8 surely stands out as a historic milestone that inspired and captivated a world desperately in need of a reminder of how precious our planet is. Jeffrey Kluger’s book “Apollo 8: The Thrilling Story of the First Mission to the Moon” brings this event to life in an enjoyable and accessible way.