In the 76 year history of Late Night Astronomy, the editorial board has never made an endorsement in a presidential election. That ends tonight. After two debates and over a year of campaigning, it is obvious that only one candidate has the judgment, temperament and stamina to be President of the United States. Through these criteria and after great deliberation, we are throwing our support behind “Giant Meteor 2016”.

Only “Giant Meteor 2016” has the ability to wipe out the national debt and take America back to the glory days of our early republic. While some in the mainstream media will attack “Giant Meteor 2016” for bringing instant death to millions and a slow death to tens of millions more, we simply find these results preferable to a Trump or Clinton presidency.

In fact, a recent poll found that 13 percent of Americans prefer “Giant Meteor 2016” when given the option. 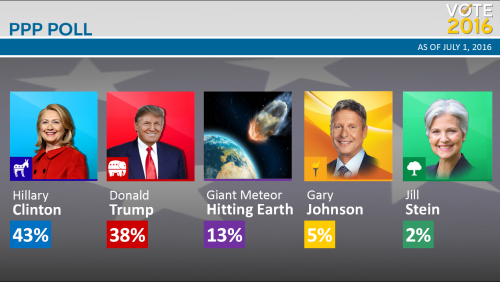 If you’re tired of politics as usual and want something that will truly shake up the system, we urge you to vote for “Giant Meteor 2016” this November. Our children’s future depends on it!