On April 12th 1981, John Young and Robert Crippen made history as the first Americans to pilot Columbia STS-1, the first orbital flight of the newly minted NASA Space Shuttle Fleet. Now, over 30 years later, the era of the Space Shuttle is coming to an end on July 8, with the 11:26am launch of STS-135.

As important as the Space Shuttle Program has been over the past 30 years, there has never quite been the excitement or following for this program as there was for the Mercury, Gemini and Apollo missions of the 60’s and early 70’s. There are some important reasons for this, the most major one being the correlation of the Space Race with the Cold War. Take the Russians out of the equation and the sense of competition and want of superiority would not have translated into the same level of exploration, which culminated with Neil Armstrong, Buzz Aldrin and Michael Collin’s Apollo 11 landing on the Moon in 1969. 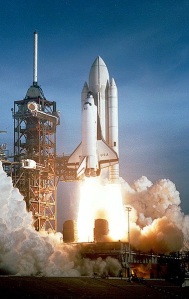 With the Apollo era finishing up in the early 1970’s, NASA made an interesting and controversial decision to move its attention from Lunar to low Earth orbital missions. One of the main reasons for this was cost. With the Apollo era ending abruptly from a lack of congressional funding, the thought was to create a lower cost, reusable space craft that could continue the path of exploration set forth by Apollo but at a much reduced price tag to US tax payers. Thus, the Space Shuttle Program was born.

Since that first launch back in 1981, the Shuttle Program has seen its share of triumphs and tragedies. In terms of scientific triumphs, its launching of the Hubble Space Telescope in 1990 has opened the worlds eyes to the elegance and complexities of our universe, inspiring young people to study the sciences and allowing us a little bit of perspective as to our place in the vast cosmos. In terms of exploration, it has led to the creation of the International Space Station, which continues to test the human ability to adapt and live in extreme circumstances along with the complex scientific experiments that occur there on a daily basis. However, with all of these triumphs, we cannot forget the loss of the 14 crew members of the Space Shuttle Challenger and Space Shuttle Columbia who gave their lives for the betterment of mankind and the exploration of the final frontier. These two disasters and the flaws in the Space Shuttle Program that they revealed will always be mentioned at the forefront of retrospectives dealing with this era of NASA history.

With over a billion dollars in cost for most Shuttle launches and the tragic failures of the Challenger and Columbia missions, some raise the question as to whether the Shuttle Program was worth it? While the excitement of the Space Shuttle may never have matched that of NASA’s early days, the doors of scientific and human exploration that have been opened over the past 30 years have been tremendous.  While the Space Shuttle may be a low Earth orbiting space craft, the scientific instruments it has brought into space have opened our eyes to the greater wonders of the universe in a way that the Gemini, Mercury, or even Apollo missions could not.

One thought on “30 Years Since Liftoff: A Reflection on the Space Shuttle Program”