Perseid Meteor Shower
One of the best light shows of the year will be going on tonight, August 12.  Go out around 11:00 p.m. and face the North East.  This will reveal the Perseus Constellation which is where the meteors will appear to be coming from.  As with all astronomy nights, but particularly meteor showers, the darker the skies the better the views, so try to get away from city and even neighborhood lights.

What is a Meteor Shower?
Meteor showers occur when the Earth’s orbit passes through the remnants of a comet that has long since traveled through our part of the solar system.  The small ice and dirt particles left by its tail hit the Earth’s atmosphere and get super heated as they streak across the sky creating “shooting stars”.

How big are “shooting stars”?
Most shooting stars are the size of a particle of sand or dust.  They are moving so fast when they hit the atmosphere that they appear very bright even though they are so small.  Some shooting stars can be the size of your hand or even a basketball, with these typically being the ones that appear to break apart as they shoot overhead.  Occasionally, but very rarely meteors will be the size of a small car, these have the best chance of making it to the ground (Fear not though, no one has ever been confirmed to have died from a meteorite strike to the head, although that would be quite a way to go, don’t you think?)

What’s the difference between a Meteor, Meteoroid and Meteorite?
When the objects that make up a shooting star are in space
they are known as meteors.
Once they hit the atmosphere they become meteoroids.
If they are large enough to hit the ground (which rarely happens)
they become meteorites. 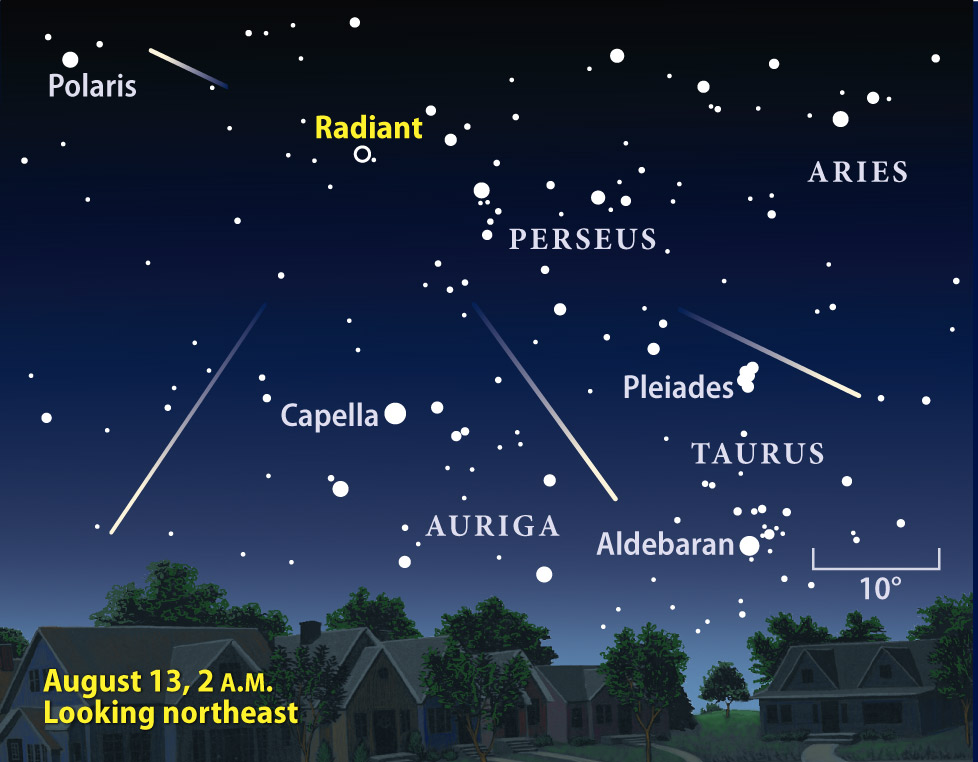 (Update)
We Just got in from observing the meteor shower.  It was a really nice show, Lauren and I watched from 12:30 to 1:30 at Sailor’s Creek State Park, an old Civil War Battle Field away from city lights giving us a great view of the Milky Way and dim shooting stars.  We saw between 50 to 60 meteors, putting the shower for that time at a little less than 1 per minute.