About a year ago, I got back into astronomy.  What had been a hobby of mine since childhood had turned into a frustration over the years because of faulty equipment and a lack of knowledge to effectively view the night sky.  My first telescope was a present from my Paw Paw for Christmas in the mid 1990’s (Oh, Those Wonder Years).  It was a 60 mm refractor and the only memories I have of it come from viewing Jupiter, Saturn, and the Comet Hale bop.  My second telescope came in Christmas 2000.  It was a 4.5 in. reflector telescope that would serve as my main scope for ten years. 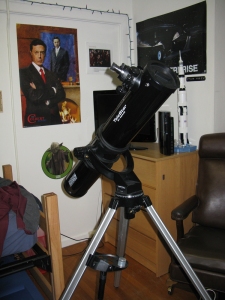 As time went on, I would observe less and less with the DS-114 because of frustrations from its “goto” feature.  Considering my age at the time (13) a telescope with motorized features was probably not the best idea, but boy did it look awesome set up in my room.  As the years went on, I would occasionally take the telescope out on a summer night to view the moon or randomly scan the sky.  Once, I remember coming across a group of spectacular spiral galaxies, but those “accidents” were few and far between.  Fast-forwarding to the winter of 2009, I had pretty much abandoned astronomy, while the interest was still there, I began to see it as a thing of my past.  That is, until one cold winter night on the tennis courts of Roanoke College.

I had recently decided to fetch my telescope from the basement of my parents house during Christmas Vacation from college.  I dusted the old lady off and to my surprise, all of the eye pieces were there and the telescope was in good condition.  Bringing it back to the college, Lauren and I decided to take it out onto the back tennis courts on a clear and cold December night.  After removing the “goto” motors (apparently it wasn’t my age, they are just crap), I moved the telescope by hand as best I could, the motions weren’t exactly smooth but never the less it was a great improvement from the battery draining, slow-moving motor system of the past.  About an hour had passed, the cold weather was starting to get to us and then a star caught my eye.  It had a dull orange/yellow glow to it.  While it was not the brightest star in the sky by a long shot, something just look different about it.

I pointed the telescope, looked through the eyepiece and was shocked to see a small ball with rings.  Lauren and I had discovered Saturn (Yeah I know that boat sailed a long time ago) but it felt like we had discovered Saturn for the first time.  This was the first time I had viewed the ringed wonder in a couple of years and I felt the joy and excitement that I remembered as a child trying to find objects in the back yard with nothing more than a “goto” telescope that didn’t really work to well and some star charts I had no idea how to read.  It was this moment that sparked my re-interest in astronomy and led to my search for a new telescope that would allow me to easily find and study lunar and planetary details as well as deep space objects.  The journey had begun and the hunt was on for what would be a nearly year-long quest to find the perfect telescope.

4 thoughts on “Getting Back in the Game”