There are some days when everything seems to go just right.

After arriving in DC and finding the DAR Constitution Hall by running into fellow Conan fans, who were wearing Team Coco shirts, Andy and I entered the 3,700 person venue and waited for the show to begin.  Our seats were amazing, being  located in the middle of the floor section to the right of the stage. 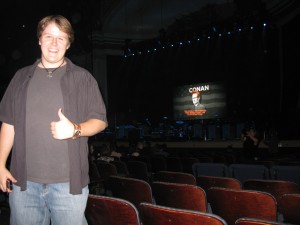 About fifteen minutes before the show started, I glanced over and saw a man standing up and talking to some people.  He looked very familiar, but I couldn’t place who he was.  Until it hit me “My God, that’s Stewart Smalley” (AKA Senator Al Franken).  After seeing a line of people form to get pictures with him I decided that if I didn’t go and get one taken I would forever regret it.  So, I walked over and said “Senator Franken, do you mind if I get a picture”

Following an opening comedy act by Reggie Watts, the lights dimmed and the Legally Prohibited Band came out (Also known as the Max Weinberg 7/Tonight Show Band).  They started off the show by playing two songs and running out into the crowd and getting the energy up.

Following this a video was shown that chronicled what Conan has been doing for the past couple months before his tour began.  It showed an over weight O’Brien eating Cheetos and laying around the house in a depressed state.  It was a hilarious bit and could have easily been a segment filmed for his Late Night/Tonight Show. The video concluded with Conan getting a call to do a Country Wide Comedy Tour and Andy Richter coming over the sound system in the Constitution Hall introducing Conan O’brien.  Conan came out to a standing ovation and performed a 20 to 30 minute minute monologue in which he joked about the events of the past couple months. 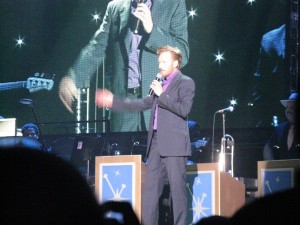 Later on in the show a good ole friend of Conan’s showed up, Triumph the Insult Comic Dog.  The taped bit had Triumph trashing Washington DC and was hilarious, even though you probably had to be from the area to really appreciate the inside jokes.

Conan returned to the stage wearing a leather outfit that he said was meant to commemorate the great stand up routines done by Eddy Murphy back in the 80’s.  This just cracked me up, I’ve seen some of the Eddy Murphy Raw tapes late on ComedyCentral and thought the leather outfit was just hilarious, even though it was
apparently stylish for the time.

Near the middle of the program Conan came out and said that something was missing from the show.  He wanted to add a fixture of Rock concerts that would enhance the show for the audience.  His solution, a giant inflatable bat, specifically “Meat Loaf’s Bat out of Hell”

A favorite recurring sketch that Conan used to do involved the infamous Walker Texas Ranger Lever.  I freaked out when Conan brought this out onto the stage.  He played some of the most famous clips including Haley Joel Osment’s
“Walker told me I have Aids”

The show ran for about two hours and progressed much like an extended episode of Late Night or The Tonight Show.  There

were sketches, a stand up comic who came out around the middle of the show and music provided by Conan and the Max Weinberg 7.  It was an incredible night and probably the only opportunity I will ever get to see Conan O’Brien.  After Conan came out for a two song encore, Balloons were blown up featuring Conan’s face that were bounced around the venue and a long lost friend made one quick appearance.  Yes, ladies and gentlemen I saw the Bear with my own weeping eyes.

After the show, Andy and I got pictures taken with Labamba when he came down to see those of us who had stayed around.

Once we left the arena, we walked around and found a group of people gathering around two tour buses.  I knew that this would be my one chance to meet Conan, so Andy and I walked over to the buses and waited…and waited…and waited.  After about thirty minutes, people from the show slowly started to walk out.  Labamba, Pender, Jimmy Vivino and a few other band members packed their bags and were calling it a night on the tour bus.

Then Andy Richter showed up.  He was very nice to everyone, taking the time to talk, sign autographs and take pictures.  I got him to sign my “Conan O’Brien Legally Prohibited Poster”. 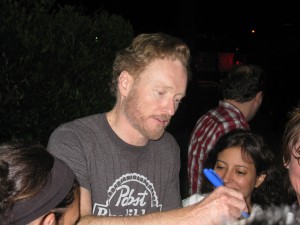 Nearly an hour after showing up at the buses, an event staff worker came by and pulled guard rails in front of the crowd, forcing us to line up behind it.  A few minutes later, out came Conan O’Brien.  He was very mellow and tall.

I was at the front of the line and asked him if I could get a picture with him, he said the problem was that if he did one, he would be there for a long time taking pictures with everyone, and they had to head out soon.  Wow, I had a conversation with Conan!  Myself and others were holding out things to be signed but none of us had a permanent marker for Conan to sign with, to which Conan cracked several jokes.  Finally someone passed up a blue permanent marker and I held my poster out over a couple peoples heads and asked Conan if he could sign his forehead.  He laughed and signed it, to which I said a very grateful, thank you.

2 thoughts on “A Late Night with Conan O’Brien”